Why I PMC - Ellie Olsen

Why I PMC: In memory of my amazing mom, Hilary Olsen.

"Mom has cancer." I never thought I would hear those words, especially not in relation to my 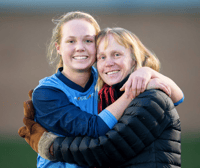 mother. She was one of the most healthy, active, energetic people I had ever met, and the thought of her getting breast cancer was unfathomable. But apparently cancer does not discriminate, and nine years later I watched my mom slowly deteriorate, and eventually pass away, from this horrible disease. It has been one and a half years since then and not a day goes by without feeling her absence.

When my mom was re-diagnosed with cancer back in 2015, I wanted to help but was unsure how.

That is when I decided to ride in the PMC. My dad, Jeff Olsen, had already been an eight-year rider, so it seemed only right to join him- literally, we ride a tandem bike. Five years later and we are still riding: for my mother who died too young, for my grandfather I never got to know, and for everyone who has had to fight a similar battle.

The PMC has changed millions of lives, including my own, and I will remain committed until there is no longer a need to ride. This year I am so excited to bike alongside my brother, uncles, aunts, and cousins, as we continue to fight for a cure. Together we are closer by the mile.