Closer By The Mile

The Pan-Mass Challenge raises money for life-saving cancer research and treatment at Dana-Farber Cancer Institute through an annual bike-a-thon that crosses Massachusetts. Since its founding in 1980, the PMC has successfully melded support from committed cyclists, volunteers, corporate sponsors and individual contributors. All are essential to the PMC's goal and model: to attain maximum fundraising efficiency while increasing its annual gift. Our hope and aspiration is to provide Dana-Farber's doctors and researchers with the necessary resources to discover cures for all cancers.

For more than 40 years, the Pan-Mass Challenge has been raising funds to pursue the cures for cancer at Dana-Farber Cancer Institute. While we have been singularly focused on eradicating cancer, we recognize that the PMC has a role to play in changing systemic racism. We deplore racism and will re-examine the PMC, aiming to combat it. This challenge will engage every facet of the PMC community in order to emerge as an even better organization and a part of the solution to this national crisis. We will keep all PMCers apprised of our ideas and our progress.

Established by Billy Starr in 1980 and under his direction, the PMC has grown considerably and consistently from its modest beginnings into an event that draws 6,700 cyclists from 43 states and 12 countries. Today, the Pan-Mass Challenge raises more money than any other athletic fundraising event in the country. The PMC generates more than 64 percent of the Jimmy Fund's annual revenue and it is Dana-Farber's single largest contributor. In 2020, the PMC donated a record-breaking $50 million to Dana-Farber, bringing the PMC's 41-year fundraising total to $767 million.

The now nationally recognized PMC is a tribute to Starr's unending desire to achieve, make a difference, and raise money for cancer research. It is also a model for all athletic fundraising events, setting the pace for a now $5 billion industry.

The Walk Before the Ride

Physical adventures had always been second nature to Starr, an avid outdoorsman who honed his skills while attending college in Colorado. From rock climbing to biking to backpacking, Starr's education was equally physical and academic; he graduated from college with a thirst for physical challenges and the expectation of backpacking around the world. And then his mother, Betty Starr, just 49, died from melanoma.

It was soon after that a 25-year-old Starr set out with three friends to hike the Appalachian Trail. Since Starr was the instigator, he ended up doing all the work: He planned the group's gear, food, and travel pace. He set up supply mailings to the appropriate post offices. He carried the heaviest load, both emotionally and physically. And when nature pelted the young men with freezing rain for the first eight straight days of their trek, it was Starr who encouraged the group to keep going and to keep focused on the challenge.

From this experience, Starr says he understood that those who put in the mental energy, not just the physical, follow their goals from theory to mission accomplished. From that point forward, Starr knew he could achieve anything to which he committed his mind and body.

Read the 2020 PMC Progress Update from Dana-Farber Cancer Institute and the Jimmy Fund. This report offers an overview of the PMC's profound effect on the Institute's important work in 2020 and on the patients who benefit from it – in New England and throughout the world, now and for years to come.

Why I PMC - Elaine Gremila

My 28 year journey with the PMC began for my love of biking and the challenge of  it.
I remember my 1st year riding coming up to a little boy trying so hard to high five the riders as 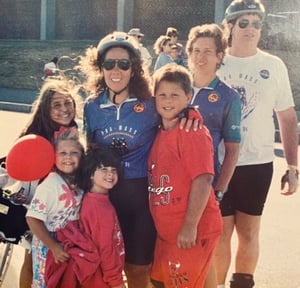 they passed by him. I slowed down and touched  his tiny hand and as I passed him he excitedly said to his mother "I touched one!" Tears filled my eyes and I knew at that very moment that this event had changed my life forever.
However I actually had no idea how much it truly would change my life in ways that I never imagined.

Cancer unwelcoming came to too many people that I loved . Close friends and cousins, would be affected and even taken away by cancer. Knowing that participating in this amazing event could give hope to these people that I loved was both gratifying and comforting at the same time. Being able to give back is the most amazing part of this journey. 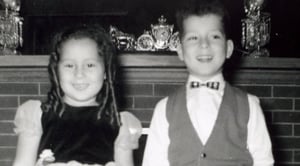 with colon cancer at 50 and would loose his battle at 52. I felt so much anger that I found myself not even wanting to ride anymore. My anger consumed me and I wasn't  comfortable with who I became. I realized that I needed to put my anger into continuing his fight. I knew in my heart that it was what he would want. Michael was the kindest and most giving man I have ever known. He taught me how to be strong and to appreciate life.

So my journey truly became a commitment to and for him. I'm not sure where I would be without

the experiences I have had through the PMC or how I would have survived losing my brother to cancer without them. Losing a twin is like losing a part of yourself, we were connected and every time I ride I feel his strength and I know in my heart he is with me. His battle has become our battle and together we will ride as long as we are able. Being a part of the PMC makes us whole again and for that I am forever grateful.

The PMC has taught me that together we can make a difference and there is absolutely no doubt in my mind that being a part of it makes us all better people!

The PMC Yearbook is an annual publication celebrating each year’s PMC weekend, gift to Dana-Farber Cancer Institute, and all who bring the PMC closer by the mile.

No greater purpose. No better partnership. 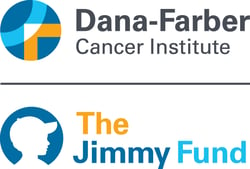 The mission of Dana-Farber Cancer Institute is to provide expert, compassionate care to children and adults with cancer while advancing the understanding, diagnosis, treatment, cure, and prevention of cancer and related diseases. As an affiliate of Harvard Medical School and a Comprehensive Cancer Center designated by the National Cancer Institute, Dana-Farber also provides training for new generations of physicians and scientists, designs programs that promote public health particularly among high-risk and underserved populations, and disseminates innovative patient therapies and scientific discoveries to our target community across the United States and throughout the world. Dana-Farber Cancer Institute's ultimate goal is the eradication of cancer, AIDS, and related diseases and the fear that they engender. Above all else, Dana-Farber makes a difference by relieving the burden of disease now and for the future through our research, clinical care, education, outreach and advocacy.