Why I PMC - Linde Hotchkiss

Why I ride…
Every August I pack my bike and fly from San Diego to Boston which is where I grew up. I unpack my bike and head west to Sturbridge, the start of the Pan-Massachusetts Challenge (PMC). Since 2008, I have made this pilgrimage and ride 192 miles from Sturbridge to Provincetown over that first weekend in August. Every year, I learn something important about myself. 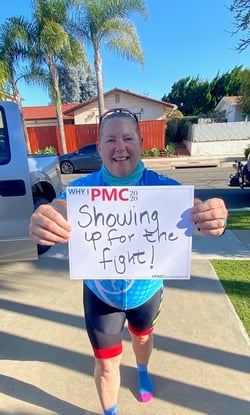 In my first year, I was grumbling a bit to myself in the beginning of day one as we rode out at 5:30 am (2:30 am for this west coaster) and there was a particularly steep climb. My legs weren't warm, the climb was difficult, it was really early in the morning, I had never ridden this far in my life, and (let’s face it) I was more than a little cranky. I was focusing on a man up the hill in front of me whose calves had something written on them. I pedaled closer and closer until I could make out the words “Living” on his left calf and “Proof” on his right. The world slowed to a crawl and the tears streamed down my face. I realized in that moment that I can do anything for a day.
In a more recent year, torrential downpours on Saturday made that day about 50% longer than usual as I am always concerned about safety. Because of the rain, my digital gear shifting started acting up and then finally quit allowing me to shift. This meant that I had to ride the last 20 miles with one gear and this included hills!!! After riding 170+ miles and much of that in the rain, it was defeating to not be able to shift into an easier gear for the hills. In my desire to find something positive in this struggle, I realized that it is much easier to endure suffering if it has a definite end point. Those that I was riding for may not have an end to their suffering while I knew mine was finite and only 20 miles away.
Another year, it was hot and incredibly humid and I was not able to take on enough water and sports drink. At

the 82-mile rest stop, I was cramping and getting sick. I told myself that I just needed to get to the next rest stop and then I would take an Uber to the end. I got on my bike and was staring forward and focused on just trying to stay upright. A man came up next to me and said “Hey Linde, how are you doing?” to which I responded “I am really struggling in this heat” and then I asked (not because I really cared, rather it was the polite thing to do) “how are you?” He responded “I am doing GREAT!”. I looked to see what was going on with this man to be so happy and positive in this heat and realized that he had one leg! I realized in that moment that it is all about perspective – I had 2 working legs and that was certainly enough for me to get to the finish.
I ride to honor of my associates, friends and family that are bravely fighting this disease. I ride in memory of my aunt Peg who lost her fight with cancer in August of 2005. I ride to make a difference, having raised more than $130,000 in the 14 years since beginning this journey. I will ride as long as I am able and seek to involve and inspire others while on this journey.