Why I PMC - JP Belliveau

This is my first-year riding in the PMC. I have considering participating in this ride for many years and after my wife was diagnosed with Multiple Myeloma in May of 2018 she had a friend that was riding in the PMC who included her to his list of people who he was riding for this past year. We went to P-town to see him cross the finish line and I was moved by the level of support for this event. This was the moment I decided to participate in the PMC and ride for my wife Jenny as well as other friends and family who have been impacted by cancer and those currently fighting this awful disease.

My wife Jenny was diagnosed with Multiple Myeloma, a cancer of plasma cells, in late June. From June to December Jenny was undergoing chemotherapy treatment to suppress the cancer cells in preparation for a stem cell transplant at Dana-Farber in January of 2019.

Jenny’s journey started in 2015 as she was diagnosed with Monoclonal Gammopathy of Undetermined Significance (MGUS) which is a condition in which an abnormal protein known as monoclonal protein or M protein is in your blood. The protein is produced in a type of white blood cell (plasma cells) in your bone marrow. MGUS usually causes no problems. But sometimes it can progress over years to other disorders, including some forms of blood cancer including Multiple Myeloma. Jenny’s primary care physician told her she had less than 3% chance of MGUS progressing to MM. Since 2015 we lived a normal life, enjoying time with our friends and family. April of 2018 we were in Mexico on vacation and Jenny started to break out in a rash and felt sick for a couple of days. We didn’t think anything of it but when we returned home she went to her primary care for a checkup and they noticed some of her protein levels were higher than normal. They continued to run more tests which started to point to the fact that the MGUS has turned to MM. They conducted an x-ray and found that she had lesions on her skull and further CAT Scans showed the lesions were all over her body which created some bone pain including minor fractures in her ribs. The bone marrow test finally confirmed what we already knew, and we quickly started to realize that our life will forever be changed. This was a very difficult time for us but more so for Jenny because you are trying to come to grips that you are now part of a club that you never seek to be a member and you lack all the information to really understand what this means long term. In late May we met with Dr. Chu in the oncology department at Hartford Hospital who would lay out Jenny’s treatment plan over the next six months. She would need to be treated twice a week Mondays and Thursdays, plus implement a new diet of prescriptions that included steroids, chemo, anti-nausea, anti-viral pills, vitamins and others. Jenny always took great care of herself, very conscious about what she puts in her body and enjoyed exercising daily and now she needs to ingest poison to treat this horrible disease. During the same time, Jenny was able to secure a meeting on 7/12 with Dr. Munshi at Dana Farber who happens to be one of the top MM oncologist in the country. We also did a lot of research to gain as much knowledge as possible, so we can have our eyes wide open as Jenny started treatment. Her first day of treatment came at Hartford Hospital and while we were both nervous, we quickly realized how many people are battling with some form of cancer and many worse off than Jenny and this was just at Hartford Hospital.

The date we have both been waiting for was upon us, our meeting with Dr. Munshi on 7/12.  This was another eyes wide open moment when you walk into Dana Farber on floor 7 (MM floor) and see how many people are diagnosed with MM. It wasn’t until after this meeting with Dr. Munshi that we both, especially Jenny, started to feel better about the process to treat MM over the next year. For all intense purposes, Jenny was given the green light from Dr. Munshi to live a normal life over the next six months while going through her treatment plan. And that is exactly what she did, we enjoyed a wonderful vacation on Martha’s Vineyard over the summer, Jenny still exercised and went back to work in the fall. During the six months of treatment, Jenny was responding well, and the doctors felt comfortable cutting back her treatment to once a week to reduce the risk of other side effects like neuropathy. Every Monday we would make the trip either to Hartford Hospital or Avon for her two-hour treatment. The nurses at both Hartford Hospital and Avon were incredible in how systematic they handled the process and the level of care they would provide their patients. The week was a bit of a rollercoaster ride for Jenny. Mondays she would have a lot of energy due to the steroids she needed to take along with the chemo. By Wednesday the steroid high would turn into a low which would also affect her appetite. She would start to feel a bit better by Friday in time to enjoy the weekend and prepare to do it all over again starting on Monday. We had a few more visits to Dana-Farber to start getting more information regarding the stem cell transplant that was scheduled for January and conduct a day full of test to make sure she is healthy enough for the procedure. As we received more information regarding the transplant the more overwhelmed we would get. The process would start 12/27 but Jenny would have the month of December treatment free which allowed us to enjoy the holiday with our family and friends. On 12/27 we headed back to Dana-Farber for the first big round of chemo prior to the stem cell transplant. The 9 days following we needed to give her two shots every morning to stimulate her bones to create more stem cells for them to harvest when we go back on 1/7. Towards the end of those 9 days, Jenny experienced intense pain due to her bones creating a high level of stem cells. Jenny rank this pain in her top four: 1. Bone Marrow Biopsy, 2. Kidney Stone, 3. Natural Child Birth, 4. Pain from the stem cell growth shots.

On 1/6 we moved into an apartment in Boston and on 1/7 Jenny had a 6:00am appointment at Dana-Farber to implant her port that would be used for all treatment over the next month. 1/7 was also the day they would extract her stem cells from her blood. It is truly incredible to see that process. They allow up to four days to harvest the stem cells however Jenny was able to provide enough in day 1 that she had a few days to enjoy Boston before checking into the hospital on 1/11 to begin her stem cell transplant. This process consists of two days of heavy chemo therapy and on the third day they will inject her with her stem cells to begin the process to rebuild her immune system. The purpose of the stem cell transplant is to make sure they are killing any cancer cells left in her body but while they kill all the bad they are also killing all the good cells. Her healthy stem cells will then help build back her immune system. Jenny was in the hospital in an isolated room until 1/28 and the following 60 days she was in isolated recovery at home. Everybody has their own journey during and after the stem cell transplant. Jenny was able to recover fairly quickly as it relates to her energy level, exercising, running and going on 25-mile bike rides (sign her up for the PMC) but she has had ups and downs as it relates to her blood counts. This month, she started her long-term maintenance plan which requires weekly blood count checks and a visit back to Dana -Farber every three months. If all goes well, the weekly blood counts will end and the visits to Dana Farber will spread out but will always be part of our life. It is our new normal and as we get more comfortable with our new normal, we are learning to look at life through a different lens. 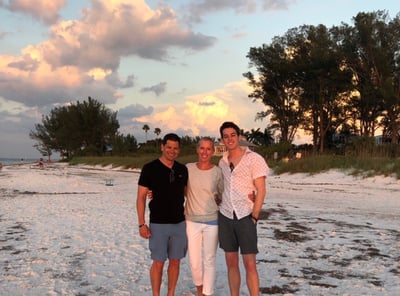 Lastly, during this process I have been moved by the amount of people effected with cancer and the incredibly caring doctors and nurses that we have had an opportunity to work with over the last year. If it was not for their care, persistent research and the generosity of people to donate to such a great event like the PMC, Jenny’s long-term plan would look very different. For that we are eternally grateful.