Why I PMC - Bob Friedman, MD

This was in 2000 and I was doing well until just after the first waterstop when my rear wheel suddenly locked up. I had to vault off the bike to keep from falling and I thought that was quite the athletic move. The road crew could not fix it and they took me back to the rest stop. I waited and one mechanic did something but when I started to ride, I knew it was not right and I had to go back. A second mechanic worked on it and I tried again to no avail. I went back and now there was only one mechanic left. He took the whole wheel apart and there were ball bearings lying on an oily rag. He said he was not sure he could fix it but I said he had to- this was my first time and I had raised $8500 and I absolutely had to do this ride.  After he got it back together, I looked around and the rest stop was totally empty. No riders and the waterstop was closing up. I thought to myself, oh boy this is my first PMC, there are 4000 riders and I am dead last.

I set out and the bike was still not right and was making clanging noises but I kept going. I came to Purgatory chasm and I could not shift the bike and there was no way to get up that hill.  I stopped and the last road crew truck came by. I said I was sorry to bother him again but I could not shift the bike into the climbing gears. He did something and said I could ride the bike but would not be able to use the lowest gear.

That hill was so steep that I could not get going and I had to walk all the way up Purgatory. I 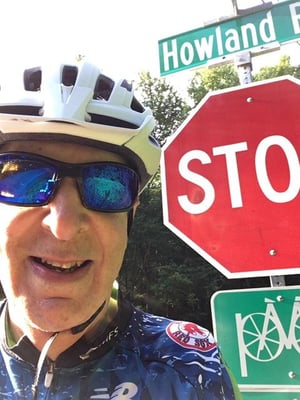 looked at my watch and rationalized that it was 10am ( we had left at 6 ) and in the summer it does not get dark until about 8:30 so I figured I had all that time to get to Bourne. I plodded along and my legs were burning on those hills, not in the lowest gear. There were no riders, no spectators and I did not know those towns or the route. What I really remember is that every intersection I came to, there was a police officer stopping traffic and waving me through. No cell phones but they must have radioed back about a lone rider. This help really buoyed me up and after about 45 minutes, I finally caught up with another rider. At the next rest stop, I gave my bike to a volunteer and the mechanic was able to fix my gears.  A few of us headed out together and I felt great to be with some other riders. As I rode along, I remembered that I had told my wife that I would probably be at the Lakeville waterstop between 12:30 to 1. I knew that was not going to happen but again I had no cell phone and no way to reach her. I think I was in Attleboro, there were some spectators and I stopped where a young family was standing. I asked if I could use their phone- the kids watched my bike and they took me inside where I still remember the big glass of ice water they gave me. I really knew nothing about hydrating and must have been way behind. I did call my wife reporting that I would be about 2 hours late. I told the young couple that I was a doctor from Middleboro and it turns out the husband was the son of a dermatologist that I had known for years.

A patient of mine was volunteering in Wareham and when I rolled by at about 5pm, he said “ where have you been?”

I will never forget the organization the PMC had to have for all those policemen to be helping me out and instead of that being my first and last PMC, I am now working in number 20.