Why I PMC - Jenna Rapoza

We are Team A for Neuro, a cycling team from southeastern Massachusetts that has been riding together since 2012. Our story is unique but stemmed from the death of A.J. Biszko, who passed away from Glioblastoma Brain Tumors at a young age. After his passing, his mother and a family friend decided to found a cycling team in his honor. The group of family and friends have ridden together ever since. Family members include Laura Loeffler, A.J.’s sister, and her husband, Chris Loeffler. Noreen DaPonte and Doreen Rapoza are twin sisters, and they ride along with Doreen’s oldest daughter, Jenna. This year, her youngest daughter Mia will also be joining the ride, after volunteering from the sidelines for 9 years. The two girls, however, have been involved since a young age, cheering Noreen from the finish line in Bourne when she first rode in 2002.  All other members of the team are friends of those involved, all with the same goal of raising money for the Glioblastoma Brain Tumor Fund at Dana Farber. From planning fundraisers to completing training rides, the PMC brings the members of Team A for Neuro closer each year. There is always an air of excitement when registration opens, which stretches to the final celebrations after the final leg of the ride. This year is no different, as Team A for Neuro starts to prepare for another great cycling and fundraising season! 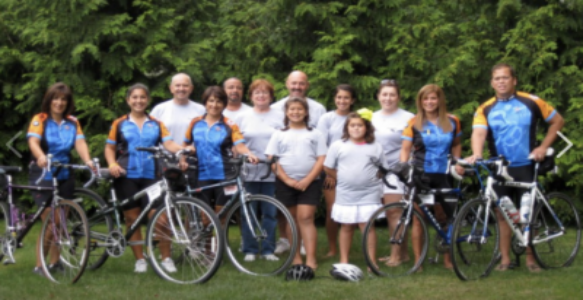